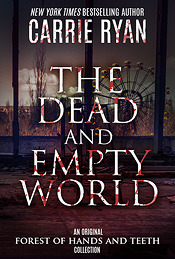 From a life raft cast adrift in the middle of the ocean to the attic of a suburban garage; from the heart-pounding moments just after the dead begin to rise, to the ravaged world generations later, the five stories in The Dead and Empty World present a chilling portrait of what it takes to survive – or not – the zombie apocalypse.

The Dead and Empty World was a gift for my NaNoWrimo victory and, to be honest, it quite surprised me how good it was. Don't take me wrong, NaNo is an amazing place but I'm a very suspicious person and since it was a free book, my hopes were not really that high.
Oh boy, I was wrong!
I checked the reviews on Forest of Hand and Teeth and some of them were kind of negative. I don't know if the style of writing changes that much or if it's because this is a collection of short stories but I liked it.
I was unsure about giving it four stars and I would give it three and a half if I could, but I ended up rating it with three stars instead.
I don't like to evaluate the writing skills because I'm reading this in English and I'm not a native speaker, so I don't think I have the right to do it. I could, if the writing was astonishingly good or surprisingly bad but neither of those were the case with this book.
As I said before, it's a collection of short stories, which makes the reading pretty easy and not tiring at all. I loved the different points of view on the subject of zombies and some of the stories were better than the others but I enjoyed them in general - apart from the last one. I don't know exactly why, but Tabitha's story was too long and I became bored at the middle.
Nevertheless, it was a good book and I recommend it for people who like zombies or just want to read something short and entertaining.